Not to be confused with the place. 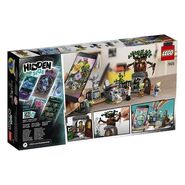 The graveyard in an early version of the app
Community content is available under CC-BY-SA unless otherwise noted.
Advertisement