Not to be confused with the vehicle.

"This powered-up school bus toy features cool tech details, like a pull-out command center and flip-out toy cannons, to inspire hours of creative play. With 2 hero minifigures, each with his and her own smartphone, tech genius J.B., 2 haunted workers and cute ghost dog figure, this building set features a lot of fun play-starters." 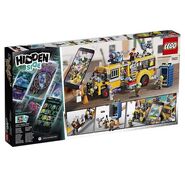 The bus in an early version of the app ( apparently it was originally called the Ghoulbus)
Community content is available under CC-BY-SA unless otherwise noted.
Advertisement