View source
watch 01:36
We're Getting Mutants in the MCU - The Loop
Do you like this video?
Play Sound

Not to be confused with the vehicle.

"This awesome train playset features cool, high-tech, ghost-catching details to inspire hours of imaginative play. And with 5 minifigures, including heroes Jack and Parker, there are a lot of play-starters so the action can start right away." 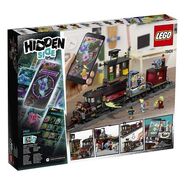