Hidden Side Wiki
Register
Don't have an account?
Sign In
Advertisement
in: Ghosts, Captured Ghosts, Boss Ghosts,
and 15 more

"Night of the Harbinger" (flashback)
Anomalo (also known as Chef Silento) is a crooked chef spirit fused with a large collection of cockroaches who in life aided Lady E with her soul obtaining plans and was the former owner of the Shrimp Shack.

"Anomalo is a bizarre mix of human and cockroaches (yes, plural). He has an insatiable appetite for bacon and has won plenty of eating contests in his life – and afterlife. Anomalo was a powerful tool in Lady E.’s soul essence-collecting plot back when his seafood restaurant was a popular high-class establishment. He’s nothing but a crude butcher with a sinister agenda."

"This chef is a real cockroach. He always has something cooking, and always something foul."

Anomalo confronts Parker and Jack at the Shrimp Shack when they are looking for Spencer. He demands that they take part in the bacon eating contest or else they will die.

He is able to grab an early lead, but is outsmarted by the Ghost Hunters as they used Spencer without him noticing. Instead of letting them go, he attacks the Hunters with knives. Parker is able to grab her phone, but is surrounded by Anomalo with Spencer acting as his shield. Jack then calls for Spencer, which gives Parker a chance to capture the evil chef.

Anomalo can throw a volley of Gloom bullets that will home in and hit a variety of targets.

Anomalo, like all Ghosts, can throw balls of Gloom on his enemies to harm them or to haunt buildings or objects.

Anomalo, like all Ghosts, can possess Humans and turn them into Gloombies.

Anomalo is wearing a yellow bowler hat paired with a collared shirt. He is also wearing a green baking apron in front of his shirt. His body is made up of 7 torsos, resembling several cockroaches. His seven right hands are each holding one fork each, whereas his seven left hands are holding one knife each. 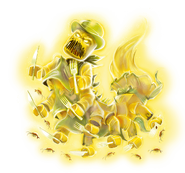