Hidden Side Wiki
Register
Don't have an account?
Sign In
Advertisement
in: Characters, Hidden Side, 2019,
and 7 more

Bill is a construction worker who was possessed and transformed into a Gloombie.

After using the Portable Toilet, he tells Nanna that she can use it, but Jack cuts her in order to vomit all of the Lime Slushies he drank.

When Jack exits, the toilet begins to shake violently, and Jack realizes he has created Spewer.

At an unknown point, Spewer is able to turn Nanna and Bill into Gloombies and they begin to attack the Paranormal Intercept Bus 3000.

When J.B. comes out of the bus, Nanna and Bill attempt to attack, but she frees them from their possession before taking out Spewer. 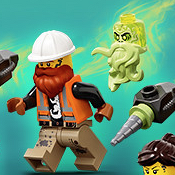