Hidden Side Wiki
Register
Don't have an account?
Sign In
Advertisement
in: Ghosts, Captured Ghosts, Boss Ghosts,
and 13 more

Spirit of the Seas

"Night of the Harbinger" (flashback)
Captain Archibald, also known as the Menace with Mercy, or simply Archibald, was in life a feared pirate captain who terrorized the Gulf of Mexico before becoming Lady E's chief officer.

Captain Archibald was once the scourge of the Mexican Gulf and known as the ‘Menace with Mercy’. A plundering pirate with fire in his eyes, a hook on his arm and an octopus named Squiddy on his shoulder. And then he was recruited by Lady E. as her chief officer! He has now merged with Squiddy into an inseparable paranormal force to be reckoned with (or better yet, avoided completely).

Half Pirate, half Octopus. He is armed with a newly sharpened cutlass, and a heart as black as his octopus ink.

When Parker is looking at the ocean, Captain Archibald appears and takes Parker into the water, claiming that Parker "will do just fine for the Lady". However, Jack is able to save her.

When the Ghost Hunters get to the docks, they see the Shrimp Boat charging for them along with Archibald on top of it. Parker and Jack begin to flee while shooting at the boat, but they shoot at Captain Jonas and Jonas Jr. who become free from their possession. After getting scared by Archibald, they too flee.

Eventually, they are able to make it inside the Paranormal Intercept Bus 3000. Archibald tries to attack the vehicle, but his arm gets cut off as the door closed.

Inside Newbury High School, Captain Archibald is observing the rest of the Boss Ghosts place their Soul Artifact into the potion. When Dr. Drewell hesitates for a moment, Archibald questions what he's doing before Dr. Drewell finally places his Soul Artifact into the potion. After everyone is finished, Archibald pours the potion onto Lady E.'s portrait and they wait for the light of the Blood Moon until the Ghost Hunters storm the area.

Later, Archibald's pet Squiddy attacks Parker, but then he is captured.

Archibald can summon an abyssal tentacle that will attack the nearest target within range.

Archibald, like all Ghosts, can throw balls of Gloom on his enemies to harm them or to haunt buildings or objects.

Archibald, like all Ghosts, can possess Humans and turn them into Gloombies. 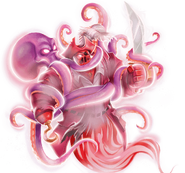 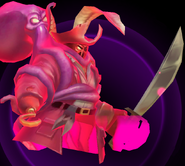 Archibald's appearance in the app game 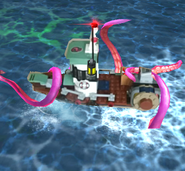 Archibald's tentacle appearing next to the tree 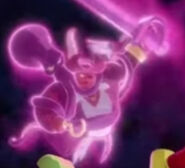 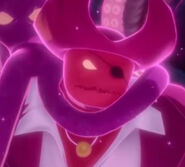 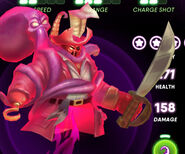