Hidden Side Wiki
Register
Don't have an account?
Sign In
Advertisement
in: Ghosts, Boss Ghosts, 2019,
and 16 more

"The Lighthouse, Part 1"
Dr. Drewell was once a genius scientist before becoming one of Newbury's most dangerous ghost residents and is one of Lady E.'s many ghostly followers.

A brilliant scientist in life, Dr. Drewell was manipulated by Lady E. into performing bizarre and unnatural experiments in her pursuit of eternal youth. Things didn’t always go according to plan, and even though he is still bound to Lady E. in the afterlife, he prefers to be left alone to care for his plant collection.

Parker, Jack, and J.B. are looking at Dr. Drewell's Soul Artifact when Jack accidentally touches the Erlenmeyer Flask, which releases him. Dr. Drewell then claims that J.B.'s lab is now his and attacks the Ghost Hunters, he is able to repel all of the attacks from Parker and Jack and steals Jack's phone, who demands that the mad scientist goes back into his bottle, which results in J.B. and Dr. Drewell telling him in unison that it's an Erlenmeyer Flask.

Soon, Dr. Drewell and J.B. develop a crush on each other over their love for science, they start to flirt with each other and Dr. Drewell tells the Ghost Hunters about Lady E. and her plans before leaving.

Dr. Drewell reluctantly uses his Soul Artifact to revive Lady E. When the Ghost Hunters arrive, he attacks J.B. by covering her in green slime, but when he realized who she was, he apologized and cleaned her up, then they pretend to fight so that his fellow ghosts couldn't suspect that there was something going on between them.

Once the Ghost Hunters captured and driven away every other Boss Ghosts, Dr. Drewell warns them that they were too late, as the Blood Moon's light reached Lady E's portrait. Dr. Drewell unwillingly escapes, since he is too afraid of Lady E. to help.

Dr. Drewell meets Jack again when he comes out of a train. Jack greets him and is nice to him, and says how J.B. doesn't stop talking about him, but Dr. Drewell apologizes and reluctantly takes Jack to The Hidden Side per Lady E's orders.

Dr. Drewell drags Jack inside the Hidden Side despite Jack's desire to leave. He puts Jack near the Mausoleum and orders him to stay where he is before leaving.

Dr. Drewell and three other Boss Ghosts come out of a portal to face Lady E., who is going to the lighthouse. She tells the Boss Ghosts that tonight is the night when she will take over Newbury. Soon after, his soul was stolen in order to release Joe Ishmael.

Like most other Boss Ghosts, Dr. Drewell has a body build of a regular LEGO big-fig. He wears a tattered dark pink lab coat, a white shirt underneath and a long, pinkish-red tie. He is mostly salmon and red in terms of coloration, with the main exceptions being his eyes and shirt, both of which are white/light pink. He has a short beard and medium messy hair that stands upright, both of which are crimson in color. He has circular glasses with black frames that he wears at all times. Unlike most other ghosts, he has visible, sharp teeth and an underbite as seen in "Good Chemistry".

Dr. Drewell can deploy a potion on the ground that will grant different powerful benefits depending on the color.

Dr. Drewell, like all Ghosts, can throw balls of Gloom on his enemies to harm them or to haunt buildings or objects. he either can control electrical objects.

Dr. Drewell, like all Ghosts, can possess humans and turn them into Gloombies. 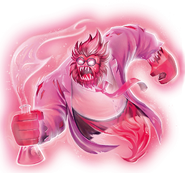 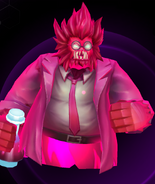 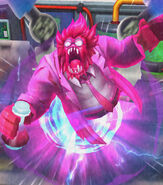