Hidden Side Wiki
Register
Don't have an account?
Sign In
Advertisement
in: Characters, Gloombie, Humans,
and 9 more

Dwayne is a biker who became one of many people who would be possessed by the Ghosts of Newbury and thus become Gloombies.

Dwyane along with Joey are being chased by the Ghost Hunters. Parker and Jack are able to hit them with their blaster, but it only releases Samuel Mason who destroys and bridge and allows the Gloombies to escape.

Eventually, they are confronted by Douglas who is able to defeat Joey. When Mason is captured by Jack, Joey becomes free of his possession. 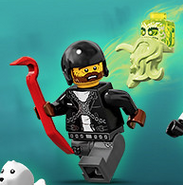