Hidden Side Wiki
Register
Don't have an account?
Sign In
Advertisement
in: Groups, Article stubs, 2019,
and 10 more

Shut down all portals to the Hidden Side (ongoing)

The Ghost Hunters (also known as the Paranormal Investigator Operation or just the Hunters) are an organization dedicated to catching the Ghosts that inhabit the town of Newbury. They are lead by J.B.

It is likely that J.B. is the founder and became the brains behind it. It's members would use an app to catch Ghosts. Parker and Jack would join it along with Douglas. They are currently working together to catch the Ghosts who threaten Newbury.

Parker and Jack are sent to Newbury High School after getting reports of high levels of Ghost activity in the area. After exploring the school, they encounter Mr. Nibs and get under attack. Luckily, Douglas is able to guide them outside where they are met by J.B. in the Paranormal Intercept Bus 3000. 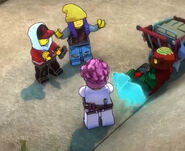