Hidden Side Wiki
Register
Don't have an account?
Sign In
Advertisement
in: Article stubs, Ghosts, Sad Ghosts,
and 10 more

Choked on a cat

"Face Your Fears"
Grandpa Sam is one of the Ghosts who haunt Newbury.

"Ate a cat named Whiskers. It was delicious, but he never lived to tell the tale."

He tells Parker and Jack he will catch them but was unable to since he was too slow and could barely float, to the point where Jack and Parker just walked away from him. He tried to get to Jack using the elevator, but the first time, Jack pressed the elevator's button to close the door. The second time, both Jack and Parker just moved past him and got into the elevator once Grandpa Sam got out, and escaped after the angry ghost cursed at Jack.

Sam can teleport to a random location in the areas around him.

Sam, like all Ghosts, can throw balls of Gloom on his enemies to harm them or to haunt buildings or objects.

Sam, like all Ghosts, can possess humans and turn them into Gloombies. 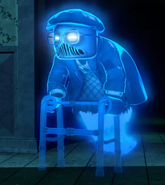 Sam's appearance in "Face Your Fears"