Hidden Side Wiki
Register
Don't have an account?
Sign In
Advertisement
in: Ghosts, Hidden Side, Male,
and 10 more

"The Lighthouse, Part 1"
Harry Cane (also known as the Weather Man) is a Boss Ghost inventor. He attacked the Ghost Hunters when they were flying El Fuego's Stunt Plane. However, he ended up getting captured by Jack instead.

Harry Cane is what happens when a completely insane evil inventor turns into a ghost. Back in the day, Harry was obsessed with finding a way of controlling the weather and turning it into a tool of destruction – you know, devastating hurricanes, horrific lightning storms, that kind of thing. Now that he’s crossed to the Hidden Side, he flies around with his helicopter backpack, glooming up storm clouds to turn them into weapons. Remember to bring your umbrella with you. Just in case.

Mad Inventor who wants to control hurricanes and lightning. Freak weather is coming your way.

While the Ghost Hunters were flying Douglas' plane, the weather turned murky and Harry Cane appeared. He begun to attack the plane and struck Douglas, which caused him to fall out of the aircraft. That's when Parker decided to be brave and pilot the plane herself. She was able to maneuver against Harry Cane and give Jack a chance to capture him.

Harry Cane is one of the Ghosts revived by Lady E. after she hit Jack's phone with Gloom. All of the Boss Ghosts surround Jack and are about to destroy him, but a stranger mysteriously appears out of nowhere and saves Jack.

Harry Cane and three other Boss Ghosts come out of a portal to face Lady E., who is going to the lighthouse. She tells the Boss Ghosts that tonight is the night when she will take over Newbury. Soon after, his soul was stolen in order to release Joe Ishmael.

Harry Cane most resembles a Big Fig with his massive size. He is covered in yellow, and has a jacket, which covers most of his body. On his back, he possess a propeller that he controls in order to go at tremendous speeds. He also has goggles on his head and a large beard that covers most of his face.

Harry Cane can fly fast for a short time.

Harry Cane, like all Ghosts, can throw balls of Gloom on his enemies to harm them or to haunt buildings or objects.

Harry Cane, like all Ghosts, can possess Humans and turn them into Gloombies.

Harry Cane can manipulate the weather and is also able to fire hail and lightning bolts from his hands. 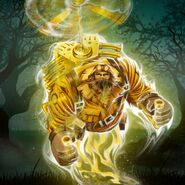