Hidden Side Wiki
Register
Don't have an account?
Sign In
Advertisement
in: Ghosts, Sad Ghosts, Hidden Side,
and 11 more

"The Lighthouse, Part 1" (only appearance)
Joe Ishmael was once the lighthouse keeper of the Fatal Reef Lighthouse in life. After his death, he became the biggest Boss Ghost who haunts Newbury.

He is a huge ghost with a long beard, glowing eyes, and a worn jacket. He also has seaweed on his arms and shoulders.

Joe’s pretty vile in the Hidden Side, but honestly, he really wasn’t any nicer back in Newbury. He used to be the lighthouse keeper there, and he went completely mad and started switching off the lighthouse on purpose to make ships crash into the cliffs below. Now he’s a massive ghost, as big as the lighthouse itself, with a bad attitude to match. The good news for our heroes is that he has a weakness: his creepy eyes.

Lonely Lighthouse Keeper who intentionally crashed plenty of ships. Now he IS the lighthouse.

In an attempt to distract the ghost hunters, Lady E. opened a portal in the center of the Fatal Reef. Jack and Parker stops in front of the portal, and a few seconds after, Joe Ishmael comes through the portal. He begins to fire at Jack and Parker with his spyglass.

Eventually, Douglas knocks the spyglass out of Joe's hand, leaving him vulnerable to the ghost hunter's attacks. Jack then captures him.

Joe Ishmael can summon two seekers that will fetch him gloom.

Joe Ishmael, like all Ghosts, can throw balls of Gloom on his enemies to harm them or to haunt buildings or objects.

Joe Ishmael, like all Ghosts, can possess humans and turn them into Gloombies. 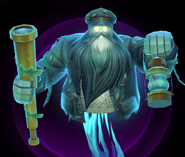 Joe Ishmael in the Hidden Side app 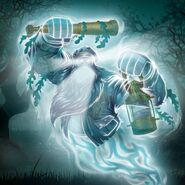 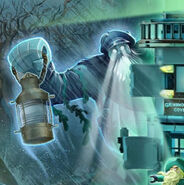