Hidden Side Wiki
Register
Don't have an account?
Sign In
Advertisement
in: Characters, Hidden Side, Female,
and 8 more

Linda Jackson is the mother of Parker L. Jackson and the wife of Bob Jackson.

Unbeknownst to Linda, her husband and their daughter are descendants of a legendary Ghost and Monster Hunter, Vaughn G. Jackson.

At the conference, Linda and her husband talked nonstop on their phones with Linda struggling to make a sell at Ogel Tech, leaving Rose to do the talking. While Rose tried to apologize to Mr. Clarke for their children's behavior they were attacked and gloomed by the teacher, who was possessed by Mamali, albeit Linda was so happy to succeed in her sell that she was the last to notice and until was too late. The Boss Ghost then declared that she was going to take Linda, Bob and Rose to the Hidden Side in order to expose their identities which would also result in their deaths as well, and the gloomed parents began to chase after their children. Luckily, Parker managed to capture Mamali while Jack freed the adults from their possession.

Linda, Bob and Rose then woke up with no recollection of the events so Jack and Parker lied about receiving many days of detention at night so they could have more time to hunt ghosts and said that the adults had fainted when they heard this. Linda believed that the punishment was "a little harsh" but she didn't protest when Bob and Rose agreed that it would teach their kids a lesson and Linda and Bob went back to their phones after Rose told her son and the Jacksons to leave and get some dinner.

Linda doesn't pay much attention to her daughter as she spends as much time as possible on the phone. This is presumably because she has a rather demanding job or she may be a workaholic. This came to the point where she refused to hang up her phones during the parent-teacher conference and didn't notice that Mr. Clarke had transformed into a Gloombie until it was too late but she still cares about Parker.

She has long light brown hair tied into a ponytail, pink lipstick and a mole on her left cheek. She wears reading glasses, a gray dress suit with a blue dress shirt underneath and black shoes. She also has a hands free phone speaker on her left ear.

Linda arrives to the school with her family and Jack.

The families scream in horror

Linda is informed that her daughter got "a lot of detention". 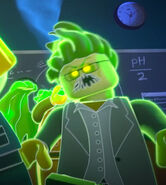