Hidden Side Wiki
Register
Don't have an account?
Sign In
Advertisement
in: Ghosts, Sad Ghosts, 2019,
and 9 more

"Face Your Fears"
Luigi Gelato is a deceased Ice Cream vendor whose now one of the Ghosts who haunt the Roads of Newbury.

He wears a short hat and has pink hair. He holds an pink ice-cream cone in each hand, and wears a small jacket with a pink strap.

"His ice cream was overpriced. One day he locked himself in his freezer and then he was out cold."

Luigi can deploy a pad on the ground that will grant any Ghosts who touches it a speed boost for a few seconds.

Luigi, like all Ghosts, can throw balls of Gloom on his enemies to harm them or to haunt buildings or objects.

Luigi, like all Ghosts, can possess humans and turn them into Gloombies.

"You scream, I scream. We all scream for ice cream." 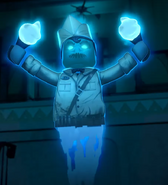