Hidden Side Wiki
Register
Don't have an account?
Sign In
Advertisement
in: Ghosts, Boss Ghosts, 2019,
and 16 more

"Night of the Harbinger" (flashback)
Mamali (also known as Nanny Mamali) is one of Lady E.'s most loyal followers and in life served as her former (fake) nanny. Even after death, she continues to serve her dark mistress.

One of Lady E.’s most trusted and loyal allies/former fake nanny (to keep up appearances that Evelina was a sweet little girl, even though she was, in fact, at least a few centuries old). Mamali would lock up visitors to their mansion and drain their soul essence with her hypnotic lullabies. Dazed guests would have no memory of their stay, except in dreams, with Mamali’s shrill voice haunting them.

An evil Nanny. She will lock you up and her awful lullabies will give nightmares for years to come.

While Jack is looking through his phone, he sees Mamali approaching him and gets scared. Jack tries to run away, but Mamali captures him using the branches of a possessed tree. She then sings him a lullaby song and tries to devour Jack, but Parker and Douglas save him and lock up Mamali in the Mausoleum.

Inside Newbury High School, she places her Soul Artifact into the potion in order to bring back Lady E. from the Hidden Side. When the Ghost Hunters show up, she attacks Jack, but is immediately chased away by the blaster.

Mamali turns Mr. Clarke, Rose Davids and Bob and Linda Jackson into Goombies to get revenge on Jack and Parker for preventing Lady E's return, by attempting to take their parents to the Hidden Side until Parker manages to capture Mamali with Jack's phone.

Mamali is one of the Ghosts revived by Lady E. after she hit Jack's phone with Gloom. All of the Boss Ghosts surround Jack and are about to destroy him, but a stranger mysteriously appears out of nowhere and saves Jack.

Mamali, along with other remaining Boss Ghosts, meets Lady Evelina at the Fatal Reef Lighthouse and congratulates her on her plan. Lady E. then says that she needs the souls of her followers to open up the portals to the Hidden Side, and takes their souls, resulting in them dying for the second time.

Mamali has long hair tied in a bun, and is dressed like a nanny with a white apron and a hat. She is blue colored and has pointy fingers resembling tree branches. Mamali also possesses a huge mouth capable of consuming even Humans in one bite.

Mamali can grow a twisted canopy of branches over her head that will block the hunter's shots.

Mamali, like all Ghosts, can throw balls of Gloom on her enemies to harm them or to haunt buildings or objects.

Mamali, like all Ghosts, can possess Humans and turn them into Gloombies.

Mamali has the power to control roots in order to capture opponents. 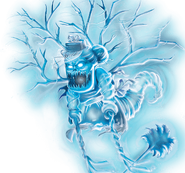 Mamali in the app game 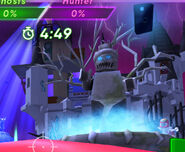 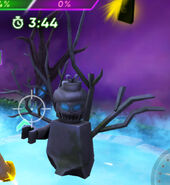