Hidden Side Wiki
Register
Don't have an account?
Sign In
Advertisement
in: Ghosts, Final Boss Ghosts, Boss Ghosts,
and 14 more

"Grave Situation"
Mr. Nibs (also known as Nibbs) is the spiritual entity inhabiting Lady Evelina's Teddy Bear. He is considered the main antagonist of the 2019 sets of which he is the Boss Ghost in the most expensive set so far.

Mr. Nibs' ghostly form comes in the appearance of a large, old, torn up teddy bear with blue fur. Most visible tearing appears on his head, with a large tear on the right side of his scalp. Unlike most ghosts, his eyes are bright white buttons, and he has a visible nose.

Nobody knows who this person was before his sudden demise, but now he seems to have chosen the form of Lady E.’s teddy bear after his crossing from the Hidden Side. But don’t let his fluffy exterior fool you. His other-worldly roar strikes fear into the heart of anyone. He will do anything to return Lady E. to her former gruesome glory.

Teddy bear of your worst nightmares. Do not give this fluffy bundle a hug. It will be soul crushing.

When Parker and Jack got out of the elevator, they spot the same teddy bear from the painting. Suddenly, Mr. Nibs comes out of the teddy bear and attacks the Hunters. Despite this, Douglas is able to save them and they meet up with J.B. in the Paranormal Intercept Bus 3000.

Inside the vehicle, J.B. uses one of the blaster guns to fight Mr. Nibs, while Parker and Jack join in.

When the Ghost Hunters show up to Newbury High School, the Ghosts begin to attack. During the fighting, Mr. Nibs blames Spencer for stealing the Teddy Bear, but he is captured by Jack.

Mr. Nibs is one of the four Ghosts revived by Lady E. after she hit Jack's phone. They all attack him and are about to kill him, but a mysterious stranger appears and saves him.

Mr. Nibs can throw a shadow bear at the nearest target on the set that will do damage over time.

Mr. Nibs, like all Ghosts, can throw balls of Gloom on his enemies to harm them or to haunt buildings or objects.

Mr. Nibs, like all Ghosts, can possess humans and turn them into Gloombies. 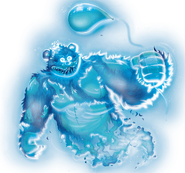 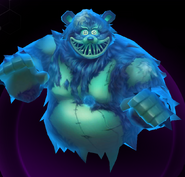 Mr. Nibs in the app game 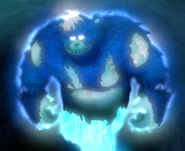 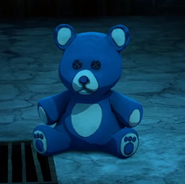 The Soul Artifact of Mr. Nibs. 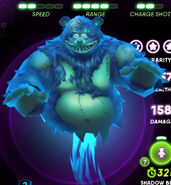 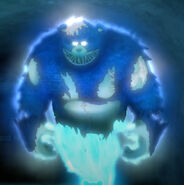