Parker L. Jackson is a character from the Hidden Side theme. She is a high schooler in the town of Newbury. Parker is friends with Jack, J.B., and Douglas.

Parker has lived in Newbury with her parents all her life. She is a bit of an outsider, hard to impress and likes to keep to herself. She’s focused, to the point and very smart. Parker has always suspected something was off about Newbury, and when she starts receiving messages from the mysterious J.B., her suspicions are confirmed. Why is Newbury being gloomed? And how? Parker is determined to find the answers.

The gang’s past adventures have made one thing very clear: ghost-hunting is in Parker’s blood. She’d rather be hunting ghosts than doing just about anything else. Speaking of, what are you doing still reading this? Let’s go catch some ghosts!

Parker has curly, medium length purple hair done in braided pigtails, with a yellow beanie to top it off. Several freckles dot her cheeks. She wears a silver three layer necklace with a letter "P" on the third chain, a black shirt with long, light blue sleeves, a maroon pouch slung over her left shoulder and ripped blue jeans.

She is also known for wearing a light blue denim jacket with patches and no pouch, her hair loose and teal colored headphones on top of her head. She also has more freckles between her eyes.

Parker is not a social person and likes to keep to herself. She also finds it difficult to trust others outside of her circle of friends and has trouble admitting her own mistakes. It is also implied that she rarely laughs. However, Parker is a good person who cares about and looks out for her friends. 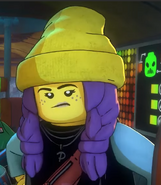 Add a photo to this gallery
Retrieved from "https://hiddenside.fandom.com/wiki/Parker_L._Jackson?oldid=8884"
Community content is available under CC-BY-SA unless otherwise noted.