Hidden Side Wiki
Register
Don't have an account?
Sign In
Advertisement
in: Ghosts, Hidden Side, Male,
and 11 more

"Oh, Rats!" (only appearance)
Rat Shaun was a former train conductor, subway guard, and bank robber. He perished in the sewers and was later hired by Lady E to capture Jack.

While Jack and Parker were trying to break their ghost hunting tie, Rat Shaun appeared and tricked them to go through separate tunnels. He got the rats to surround Parker but she showed a cat video and the rats all ran away. Rat Shaun then gets captured by Parker.

Rat Shaun is wearing a tattered yellow sports jacket over a white button down shirt, a black bowtie, and an orange vest. However, in the show, his vest is blue. He is also wearing a black conductor's hat with a yellow tag connected to an orange stripe. He is holding a flashlight in his left hand and his rat's tail in his right. A mountain of smaller, brown rats is formed on his back, along with groups of two-three rats encircling his torso this sugest that he got eaten by rats.

Imagine rats. Lots and lots of rats, trained by a twisted ghost to attack and fight. That’s what you get when you cross paths with Rat Shaun, a former bank robber who escaped into the Newbury sewers as he ran away from the cops, got lost in there, and... never came back to the surface again. Now he haunts the abandoned Newbury subway tunnels. Next stop: Rat Station. We’re not getting off there, no way.

Rat Shaun can make his rats create a decoy.

Rat Shaun, like all Ghosts, can throw balls of Gloom on his enemies to harm them or to haunt buildings or objects.

Rat Shaun, like all Ghosts, can possess Humans and turn them into Gloombies. 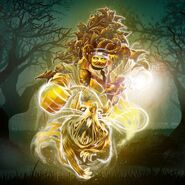