Hidden Side Wiki
Register
Don't have an account?
Sign In
Advertisement
in: Ghosts, Boss Ghosts, Hidden Side,
and 13 more

Highwayman (still is as a ghost)

"Life in the Ghost Lane"

"Night of the Harbinger" (flashback)
Samuel Mason (Also known as Mason or Sam Mason) was in life a highwayman who tormented and robbed the people who traveled on the roads of Newbury. Now he has returned from the Hidden Side to continue his criminal career, and now forever joined at the hip by the mute John C. Newt.

No road is safe when outlaw Samuel Mason relives his glory days of preying on the hapless travelers going to and from Newbury. Upon his return from the Hidden Side, he merged with the lesser-known criminal John C. Newt, who is mute and now protrudes from Mason’s left hip.

No road is safe in Newbury. Samuel wreaks havoc and seeks to drain soul essence with his cursed gun.

After emerging from Dwayne and Joey's ghost bikes, Samuel shot the highway bridge in order to get the Ghost Hunters off his tail. However, Douglas and Spencer were able to go through the destroyed bridge to capture Samuel, but only for Douglas to take a picture of him instead. Before Samuel could shoot Douglas, Jack and Parker stopped him and Samuel was pulled into Jack's phone.

Samuel Mason was one of the Ghosts freed from Jack's phone by Lady E. Once free, Samuel attacked Jack and called him a coward when he had to hide behind a gravestone. When Jack declares that he won't join them, Samuel and the other ghosts try to kill him until Vaughn G. Jackson arrives, hits the ghosts with his car and saves Jack.

Samuel Mason, along with Dr. Drewell, Mamali, and Harry Cane, come out of a portal next to the Fatal Reef Lighthouse. Lady E. comes towards her minions and congratulates them for a job well done. She reveals that the Hidden Side can be revealed with one thing, which happened to be the souls of these four ghosts. Samuel's soul was absorbed by Lady E. and used to open portals connecting the Hidden Side to the Living Side.

Samuel, like most other boss ghosts, has a Lego big-fig appearance. He wears a typical wild-west bandit outfit with a vest, a shirt, a pair of gloves, a bandana covering his mouth, and a cowboy hat. John, on the other hand, has the appearance of a regular lego minifigure. He has a long coat instead of a vest.

Most often, Samuel is seen with two six-shot revolvers, while John is seen with a lasso. In the show, however, neither of them has any of their weapons.

Mason can prepare a powerful long-range shot that can hit multiple times when he fires at a target again.

Mason, like all Ghosts, can throw balls of Gloom on his enemies to harm them or to haunt buildings or objects.

Mason, like all Ghosts, can possess Humans and turn them into Gloombies. 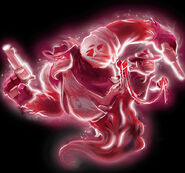 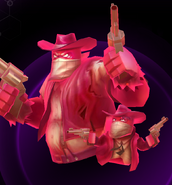