Seymour's legs are white and have metal panels on the front. His torso is a screen that contains his face. On his head, he has two antennae. On his screen are two light blue circles resembling eyes and his "mouth", also light blue, looks like that of a child with a missing tooth. 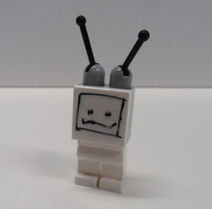 An early prototype of TeeVee.

TeeVee from the Alpha Team theme 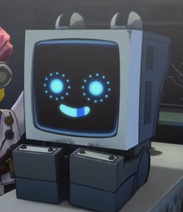 Tee Vee after being finished by J.B.
Add a photo to this gallery

Retrieved from "https://hiddenside.fandom.com/wiki/Seymour_TeeVee?oldid=23454"
Community content is available under CC-BY-SA unless otherwise noted.