Jack's dog (still is as a ghost)

Spencer (also known as Spence by Jack) is a Ghost dog who was once the pet of Jack Davids, before dying in a traffic incident. However, he returned to Jack as a Ghost thanks to the ghostly forces in Newbury.

Oh, did you think ghosts could only be human? Not necessarily. Spencer was Jack’s best friend in the whole wide world. He still is, even though… look, it’s complicated. Shortly before his move to Newbury, Jack lost Spencer in a tragic traffic accident. But now, thanks to the haunting of Newbury, Spencer is back as a (mostly) invisible ghost dog. He’s still as lively as any puppy in ghost form can be, fiercely loyal to Jack, but also easily distracted. Especially by bacon.

Still adorable, still mostly invisible and still obsessed with bacon. That’s pretty much the story with Spencer. And you know what? Everyone’s OK with that – we like him just the way he is. Did someone say bacon?

Spencer was Jack Davids' pet back in Boston. Spencer always accompanied Jack when he went skateboarding and recorded videos for his vlog while Spencer liked to chase cars, sometimes Spencer helped Jack with his videos such as trying out Jack's ideas like mixing jam with a jalapeno. Spencer lived a happy life and was loved and cared for by Jack, who had a lot of pictures of Spencer in his bedroom's bulletin board. When Jack's mother announced that the family was moving to Newbury Jack was very upset, which made Spencer sad as well. Unfortunately, Spencer died a week before the family moved when he was run over by a car.

However, after Spencer died he became a ghost and kept following Jack around after he moved to Newbury while Jack remained unaware of this until J.B. installed the Ghost Hunter App on his phone, which allowed him to see Spencer. Jack was overjoyed to have Spencer again and they joined the Ghost Hunters together.

When Jack is possessed by a Ghost, Spencer jumps from the window to save his former owner. After J.B. gets report that they should leave Newbury High School, the Ghost Hunters try to exit, but they realize they are surrounded by Ghosts as Spencer attacks one of them.

Eventually, Douglas is able to lead them out where they meet J.B. in the Paranormal Intercept Bus 3000. Spencer is also able to board with the stuffed teddy bear. 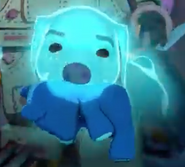 Spencer with Lady E's old teddy bear in his mouth

Add a photo to this gallery
Retrieved from "https://hiddenside.fandom.com/wiki/Spencer?oldid=8869"
Community content is available under CC-BY-SA unless otherwise noted.