Hidden Side Wiki
Register
Don't have an account?
Sign In
Advertisement
in: Ghosts, Boss Ghosts, 2019,
and 9 more

Potty Mouth (only appearance)
Spewer was a ghostly entity made up of all kinds of trashed items whose only goal was to spread his gloom to as many items as possible.

This ghost is pure trash… literally. Anything worn, destroyed, ruined, smashed, smelly, rusty, moldy… this guy is it. Getting rid of him won’t be pretty. Spewer wants to haunt as many physical objects as possible and spread his bile around everywhere. Oh, and he only speaks in burps and belches… Yikes.

He is pure garbage. literally. If there is something stinky in your neighborhood, it's likely Spewer.

After Jack vomits in the Portable Toilet, Spewer is created and begins attacking Jack. He then creates a Gloombie out of the Portable Toilet and attacks the Ghost Hunters. Despite this, J.B. is able to defeat him using her crossbow.

Spewer can leave a piece of himself on the ground that enables him to quickly teleport back to where he left it.

Spewer, like all Ghosts, can throw balls of Gloom on his enemies to harm them or to haunt buildings or objects.

Spewer, like all Ghosts, can possess Humans and turn them into Gloombies.

Spewer comes in the form of a giant, blue, humanoid-looking mass of slime with trashed objects covering his body.

In "Potty Mouth," he is portrayed with a lime-green color and is implied to be made up of Jack's Lime Slushie composed vomit. 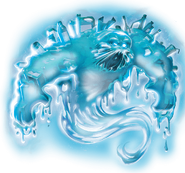 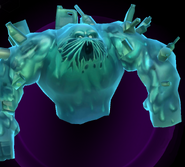 Spewer's appearance in the app game