Hidden Side Wiki
Register
Don't have an account?
Sign In
Advertisement
in: Ghosts, Captured Ghosts, Wild Ghosts,
and 13 more

"Skeleton in the Closet"
The Bawa, also known as Bawa Bat, is a peculiar ghostly being who was originally in life as an employee of the South East Burymount Engine Railroads before returning as a bat-like ghost carrying his old colleague.

This former employee of the South East Burymount Engine Railroads has returned to Newbury in a most bizarre form with his soul-sucking persona on full display. He has brought (or forced) his old colleague back with him from the Hidden Side, and their ghastly bat/zombie-conductor configuration helps confuse and paralyze their prey. He doesn’t speak, but his supersonic shriek will have your blood run cold.

A monstrosity with sharp teeth, flapping wings and supersonic shriek that will rip your nerves to shreds.

While Parker and Jack entered Newbury Railroad Station, The Bawa was spying on them and attempted to attack in stealth, but he fell.

The Ghost Hunters find the machine J.B. ordered, which is still on the train. While they debate on who won the bet, The Bawa flies out of nowhere and possesses the train, causing the train to get a mouth and eyes and take Parker and Jack.

After Parker and Jack take care of the Ghosts, The Bawa deposes the train causing it to fall before repossessing it. Parker then sees El Fuego's Stunt Truck and is able to land the machine on the trampoline while The Bawa continues to fly off with the train.

When the Ghost Hunters arrive at Newbury High School, the Ghosts begin to attack. During the fighting, Douglas is trying to remove the portrait of Lady E., but The Bawa sees him. Luckily, he was captured by J.B.

When returning to Newbury, The Bawa took on the form of a large, monstrous bat with long ears and sharp teeth. He was originally an immense, black bat with yellow eyes. When he possessed his colleague, he turned yellow while his colleague was wearing his conductor uniform and square glasses.

In "Skeleton in the Closet," The Bawa's colleague's outfit changes color from gray to brown while his hair is no longer messy.

The Bawa can fly in the air and heal for a portion of the gloom he spread.

The Bawa, like all Ghosts, can throw balls of Gloom on his enemies to harm them or to haunt buildings or objects.

The Bawa, like all Ghosts, can possess Humans and turn them into Gloombies. 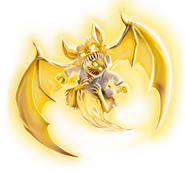 Official art of the Bawa

The Bawa seen spying on Parker and Jack. 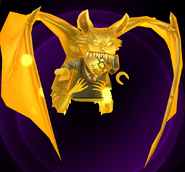 The Bawa in the app game.