Hidden Side Wiki
Register
Don't have an account?
Sign In
Advertisement
in: Locations, 2019, Hidden Side,
and 2 more

Ghosts
The Hidden Side is another dimension parallel to The Living Side. It is inhabited by the spirits of the deceased. It was previously taken over by Lady Evelina. Ghosts are able to return from the dimension, although for unknown reasons Lady E. was unable to return until "The Great Escape."

Lady Evelina D'Ombre is forced into the Hidden Side by Vaughn G. Jackson.

When Douglas returns, he inhabits a plastic skeleton, and warns the Ghost Hunters of Lady E.'s return at some point.

When Jack Davids was looking for Rat Shaun, he gets sent to the Hidden Side by Dr. Drewell instead.

After being dropped off by Dr. Drewell, Jack is confronted by Lady E., who damages his phone to free all the captured ghosts, and completely surround him until legendary Ghost Hunter Vaughn G. Jackson comes to his rescue.

Vaughn and Jack drive up to the school, where it is revealed that Jack can use his phone to see the living side from the Hidden Side. Jack then tries to get Parker L. Jackson to see him through the App through 'haunting' her. Eventually, Parker notices Jack and Vaughn. It is then revealed that Vaughn is Parker's quadruple great grandfather.

J.B., Douglas Elton, Parker, and Spencer arrive at a tree, which is revealed to be the weakest point in between the living side and the Hidden Side. Jack manages to escape the Hidden Side, but so does Lady E.. Parker ends up in possession of Vaughn's crossbow, and runs off with the rest of the Ghost Hunters after vowing to finish what Vaughn started.

Blaze M. Barr escapes the Hidden Side via gateway, but is soon after caught.

So far the only known area of the Hidden Side is a graveyard (with a mausoleum that looks somewhat similar to the one seen in Vlog Hog) where the lightposts seem to be alive as they can move on their own (as well as nearly everything else in the Hidden Side). There are several cracks on the floor with a green light coming out of them. The moon has a big sad face on it. 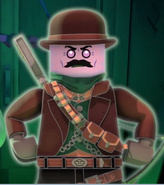