Hidden Side Wiki
Register
Don't have an account?
Sign In
Advertisement
in: Ghosts, Genderless, Characters,
and 11 more

In the app and box art for the 70437 Mystery Castle, the Maw's head only contains its white eyes, along with notable stitch marks where the mouth should be. Dark blue spikes are protruding from the Maw's arms and down its sides, along with markings that resemble runes covering its entire body. It is also wearing gloves. The Maw's chest opens to reveal a large mouth with sharp teeth encircling the inside, and a skinny, long tongue that trails out. However, in "Night of the Harbinger", the Maw looks rather like an orange flower, with many rows of teeth on the inside and a long tongue protruding from the inside.

Eons old, the Maw is a gigantic, indestructible creature-type-thing. You know, the ultimate destroyer and insatiable devourer of worlds. It travels in dimensions beyond ours, beyond the Hidden Side, beyond our comprehension, really. So yes, it would be kind a of big threat to Newbury, and pretty much the rest of the world, too, if it ever came to these parts of our universe. It doesn’t seem all that likely, though, does it? Does it?

What is the Maw?

Eons old, the Maw is your typical gigantic, indestructible creature-type-thing. You know, an insatiable devourer of worlds. It travels in dimensions beyond ours, beyond the Hidden Side, beyond our comprehension, really. We’ve already said too much. Please move along, nothing to see here.

An endless hunger for all things. This creature will devour all. And now it has come to our world!

For eons, the Maw devoured universe after universe, and those whom it ate became the Old Souls, which it could unleash as ghosts. At some point, the Maw came across a planet in which the Shadow-Walkers resided. The Maw devoured this planet and the Shadow-Walkers added to the ranks of the Old Souls. Later, the Maw followed King Nehmaar Reem to his world, so to save his people, Nehmaar teleported himself and his castle to lure the Maw away. Reem brought the Maw only to unpopulated worlds, so as to save others from being eaten by the Maw.

Recently, Reem ran out of unpopulated worlds to feed to the Maw, so he teleported his castle to the Living Side and the Maw soon came after. The Ghost Hunters, working with Reem, tried to find a way to stop the Maw, but couldn't until the ghost dog Spencer helped them form a plan by attempting to eat his tail. Reem teleported Jack Davids and Parker L. Jackson into the Maw's mouth and they created a gateway. The Maw then ate itself while Reem teleported Jack and Parker back to Newbury.

The Maw can absorb Gloom from the air around it. A max of 5 gloom, and a minimum of 3 gloom.

The Maw, like all Ghosts, can throw balls of Gloom on its enemies to harm them or to haunt buildings or objects.

The Maw, like all Ghosts, can possess humans and turn them into Gloombies.

Official art of the Maw

The Maw in the app. 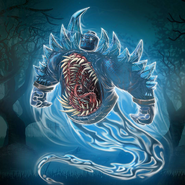 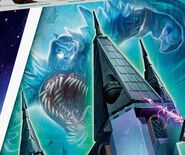 The Maw in the app. 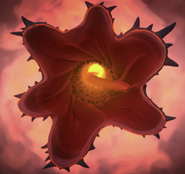 The Maw as seen in Night of the Harbinger, looking severely less like a ghost than in the app and set.

Old Souls flying out of the Maw.

The Maw in the Hidden Side Video Game 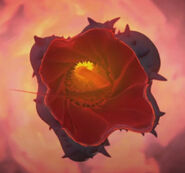 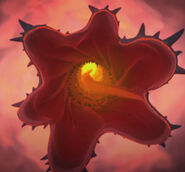 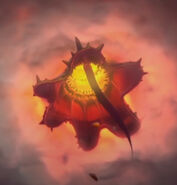 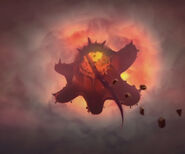 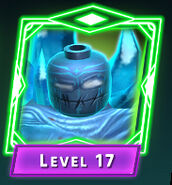