Hidden Side Wiki
Register
Don't have an account?
Sign In
Advertisement
in: Ghosts, Final Boss Ghosts, Male,
and 10 more

Choked on a balloon

"Carnival of Doom" (only appearance)
Tragico (also known as the Laughing Man) is a Boss Ghost clown that hangs out in the Newbury Fairground.

Riddle me this: what floats and is scarier than a clown? You got it – it’s a ghost clown. Ugh! Before he became a ghost, Tragico was a pretty rubbish clown. He really tried, but he just couldn’t make people laugh. Over time, all that clown failure turned into clown anger. Have you ever seen an angry clown? Even worse – an angry ghost clown? It ain’t pretty. Watch out with this one. Really, we’re not being funny.

Crossed over during a fatal balloon swallowing act. Still desperately failing to entertain.

While Parker and Jack are exploring Happy World, Tragico is spying on them and lures them into the House of Mirrors. Inside, he uses the evil reflection of Parker and Jack to capture them.

Parker and Jack are seen tied on a roller coaster with Tragico stopping the coaster. He attempts to throw Gloom at them, but he misses. Parker then demands to be released, and Tragico instead pushes the coaster down the tracks.

Luckily, they are saved by Douglas, who coaster crashes. However he is able to rebuild himself, and asks if he can do it again. Tragico allows him to ride another roller coaster while Parker and Jack put off capturing Tragico.

Tragico is a clown-type Ghost with a lofty body. He has three heads which constantly changes depending on his emotions and is colored cyan. On the top of his head, he owns a top-hat and a unique hairstyle.

Tragico can deploy a car that will summon decoys over time.

Tragico, like all Ghosts, can throw balls of Gloom on his enemies to harm them or to haunt buildings or objects.

Tragico, like all Ghosts, can possess humans and turn them into Gloombies. 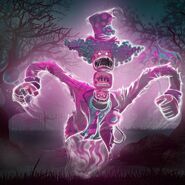 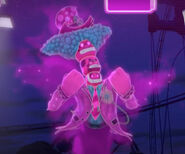 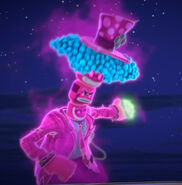 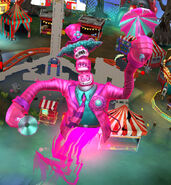