Hidden Side Wiki
Register
Don't have an account?
Sign In
Advertisement
in: Ghosts, Characters, Male,
and 13 more

Sacrificed himself to trap Lady E. in the Hidden Side

Vaughn was once a legendary Ghost and Monster Hunter who became an Anger Ghost after he passed away. Over a hundred years later, Vaughn's great-great-great-great granddaughter, Parker, became a Ghost Hunter herself.

Newbury’s original monster hunter/ghost hunter, and Parker’s great-great-great-great grandpa. Back in 1888, Vaughn sacrificed his life to force Lady E. over to the Hidden Side. Now on the Hidden Side himself, he’s still busy fighting evil spirits. And learning about modern-day ghost-hunting technology and everyday items, which he sometimes mistakes for other-worldly clues. He still prefers to take down malicious monsters and other awful abominations with his trusted old crossbow.

Meet Newbury’s original monster hunter/ghost hunter, and Parker’s long-departed great-great-great-great grandpa. He’s still busy fighting evil spirits in the Hidden Side while learning about wonders of modern technology. He still prefers to take down malicious monsters and other awful abominations with his trusted old crossbow.

Very little is known about his past except that he was a legendary Ghost Hunter who fought all kinds of creatures such as Vampires, Werewolves, Gargoyles, the Loch Ness Monster and (possibly) Demons. He was completely committed to Ghost Hunting to the point where he firmly believed that in order to be a Ghost Hunter you have to give up things like friends and family. Despite this he fathered at least one child before he sacrificed himself to drag Lady E into the Hidden Side in 1888, resulting in both of them dying and becoming Anger Ghosts.

When Lady E. and the other Boss Ghosts attempt to kill Jack, Vaughn arrives in his car, hitting the other ghosts with it and tells Jack to get in, which he does. However, when Jack realizes that his rescuer is also a ghost he instinctively draws his phone until Vaughn reminds Jack that he just saved his life. He then tells Jack that he is not alone in his fight and tells him to buckle up before accelerating.

Vaughn and Jack arrive at Newbury High School, where Jack realizes that he can see the Living Side from the Hidden Side with his phone while Vaughn mistakes the school for a work mill but Jack tells him that the place is a school, making Vaughn believe that Jack works as a teacher.

Vaughn accompanies Jack as he tries to locate Parker and tries to help him haunt her in order to get her attention to no avail since she doesn't get scared easily and when Parker tries to leave, Vaughn tells Jack that haunting is about fear and that losing Jack is what scares Parker and Jack screams Parker's name, which finally gets her attention and she uses the Ghost Hunting app to see them and Parker calls Vaughn her great-great-great-great grandpa, making Vaughn realize that Parker is his descendant and chuckles while Jack stares at him in disbelief.

When the Ghost Hunters opened a portal to the Living Side, Parker and Vaughn greeted each other and he referred to her as "grand girl Parker". Parker urged Vaughn to come with them but was unable to since Lady E sent Axel Chops to distract him while she herself took the chance to cross the portal. Vaughn managed to throw his crossbow at Parker before the portal closed, which Parker kept with her and swore that she would finish what her ancestor had started.

Vaughn eventually manages to escape the Hidden Side through one of the portals Lady E opened and saves the Ghost Hunters from Kreatoru, a ghost that Vaughn had been hunting for awhile. He then enters the submarine and is finally reunited with Parker, much to the latter's delight.

The next day, Vaughn stays with J.B. in her lab while Parker is in class, much to J.B.'s annoyance since Vaughn won't stop touching her inventions out of curiosity. That night, Vaughn accompanies Parker as they go Ghost Hunting and Parker asks him for advice but Vaughn just tells her that to be a Ghost Hunter she needs to hunt ghosts and reveals that she has captured more ghosts then he had at her age and that she is a great Ghost Hunter. When Parker reveals she is worried that Jack may not want to be a Ghost Hunter anymore Vaughn tells her that if Jack is not with them hunting ghost then he is no Ghost Hunter. Vaughn and Parker then find one of the Maw Summoning Gems and Parker takes it with her while Vaughn stays behind to resume ghost hunting.

Later, Vaughn is in J.B.'s lab with all the other Ghost Hunters as Parker tells them about her encounter with Nehmaar Reem and Vaughn tells everybody to prepare the pitchforks, torches and hounds, although he becomes disappointed to see the "hound" (Spencer) prefers to chase his own tail and laughs when Spencer takes one of Douglas' arms until Parker and Jack start arguing about Jack being more focused on his channel and spending time with Rami and says Vaughn is a better Ghost Hunter than Jack, leading to them getting mad at each other and leaving the lab.

That night, Vaughn accompanies Parker and Jack to investigate the abandoned prison, where they are startled by Rami and his friends since Jack invited them to do another collab, making Parker angry as her and Vaughn decide to investigate the place themselves. After awhile Parker thinks they should go get Jack but Vaughn tells her that being a Ghost Hunters requires making sacrifices like family or friends and that if Jack is lost "so be it" before he leaves Parker to continue hunting and eventually finds Nehmaar Reem, who was planting the second Maw Summoning Gem on the rooftop. Vaughn attempts to shoot him with his crossbow but Nehmaar lifts him up in the air and throws him against the wall. After Nehmaar leaves Vaughn watches as Jack and Parker get into another argument until Douglas stops them and convinces them to make up. Seeing Parker and Jack apologize makes Vaughn shed a tear and reveal that he never had a "bestie". When Parker wonders how they are going to get to the Nehmaar's castle Vaughn summons his race car and drives them there but when they attempt to enter the castle Vaughn, Douglas and Spencer and captured by a green force field while Jack and Parker continue without them.

Despite being a ghost, Vaughn has a more human-like appearance and looks almost the same as a living human except for his gray skin and eyes. Vaughn has a black mustache and wrinkles around his mouth and eyes. He wears a brown bowler hat, a green bandana, a brown jacket, a bullet belt around his chest and one on each of his legs and black pants. Apparently he looks human enough for the citizens of Newbury, such as Rami's Entourage, to not be scared or put off by him.

Vaughn is serious and very brave since he also opposes Lady E and has the courage to stand up to her. He is very "old school" and prefers his old crossbow to hunt ghosts rather than modern technology. Even though he cares about Parker, he also believes that to be a Ghost Hunter one must sacrifice everything for the cause, including friends and family. However, he was still moved to tears upon seeing Parker and Jack reconciling after having a huge fight and seemingly regrets never having a "bestie". 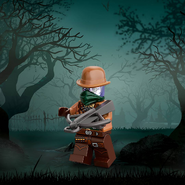 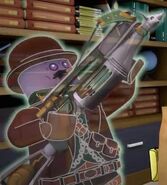 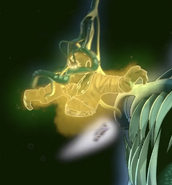 Vaughn prepares to fire his crossbow. 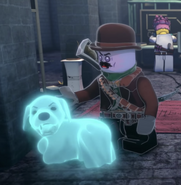 Vaughn is unimpressed by the "hound".

Vaughn and Parker discover a gem.

Vaughn with the Supernatural Race Car. 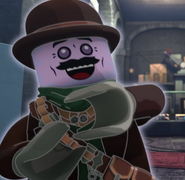 Vaughn is surprised by a tentacle in a case in J.B.'s Lab. 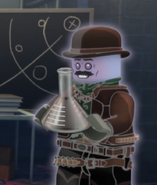 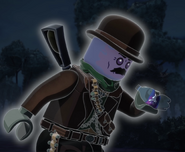 Vaughn confuses trash with a clue.

Vaughn, looking through the window of a cell door in the Newbury Penitentiary. 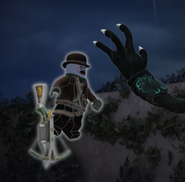 Vaughn is held in the air by Nehmaar Reem.

Vaughn and Douglas prepare to escape from a fire shield in the Mystery Castle. 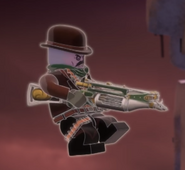 Vaughn and Douglas are surrounded.

J.B. arrives in her mech.

Vaughn is saddened that Jack and Parker have not returned from the Maw. 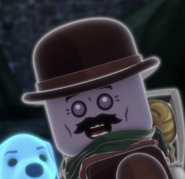 Vaughn is shocked when Parker and Jack do return, along with Nehmaar Reem. 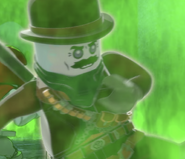 Vaughn tries to break out of the fire shield. 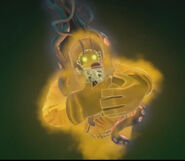